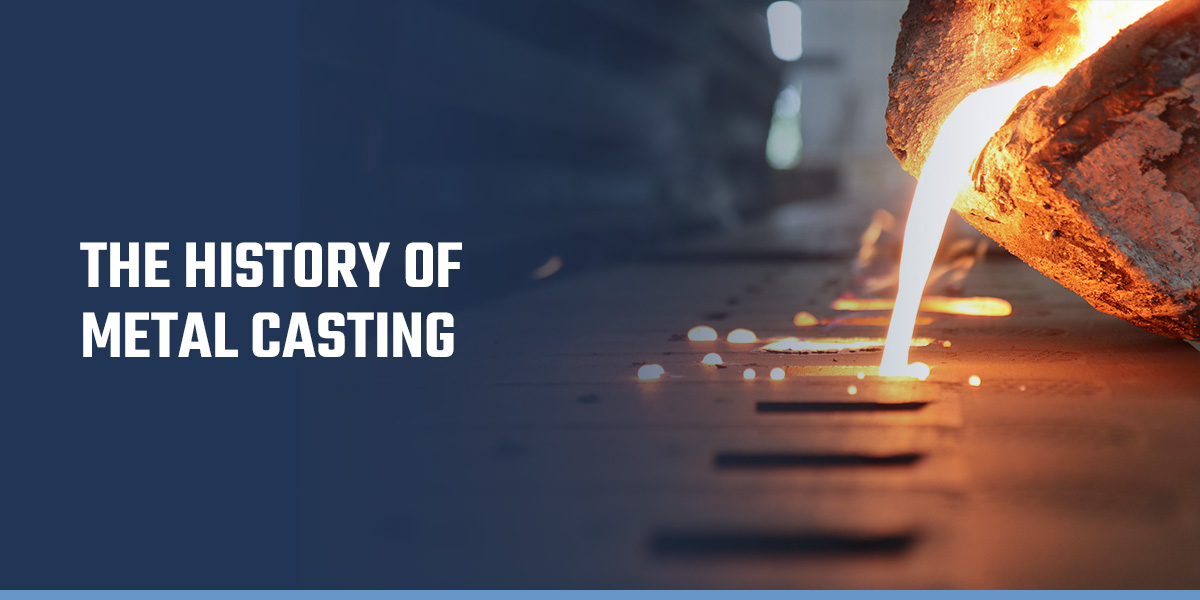 The History of Metal Casting

Metal casting can be traced as far back as the Bronze Age, when humans first began creating tools from metals rather than stone. Over the years, it’s turned into an intricate metalworking technique with many different applications.

Read on to learn about the rich history of foundries and the people who were key to developing metal casting processes.

Metal Casting Through the Ages

Since its humble beginnings in prehistory, metal casting has come a long way. It brought humanity out of the Stone Age and enabled the rise of some of the great ancient civilizations. And it’s still used today to make parts and components for many industries, such as automotive manufacturing.

Let’s start from the beginning.

Where Did Metal Casting Come From?

The earliest metal castings were made with gold and copper — because these metals were very malleable, they were easy to melt and cast. Bronze soon replaced them, however, due to its rigidity and strength.

The earliest bronze castings were made using open stone molds. This method resulted in objects that had one flat side, which limited casters’ creativity. Using the lost wax process, which dates back to 3,000 B.C., casters created plaster molds from wax models. The lost wax technique enabled them to create more intricate shapes such as decorative statues and figurines.

Metal casting was also developing quickly in ancient China. During the Shang Dynasty, Chinese metal casters used an innovative technique for metal casting. They combined compressed sand with clay to make molds, making them the first to use sand casting in history.

Later, around 500 B.C., Zhou Dynasty casters invented cast iron, which was used mostly for farming applications. This iron was known as pig iron and was very brittle, making it unsuitable for many items.

The Carolingian emperor Charlemagne revived the declining art of bronze casting in the 7th century — perhaps most notably, he commissioned enormous cast bronze portals for the Palatine Chapel in Aachen, Germany.

The Middle Ages saw vast construction of cathedrals and churches across Europe, which often included cast bronze in their architecture. Bronze casters had to come up with innovative casting techniques to keep up with the demand from the Church, which led to significant advancements in metal casting.

However, iron casting was slow to catch on in Europe. Blacksmithing remained the primary ironworking method well into the 1300s, likely due to the brittleness of pig iron, which was the material used to make cast iron. 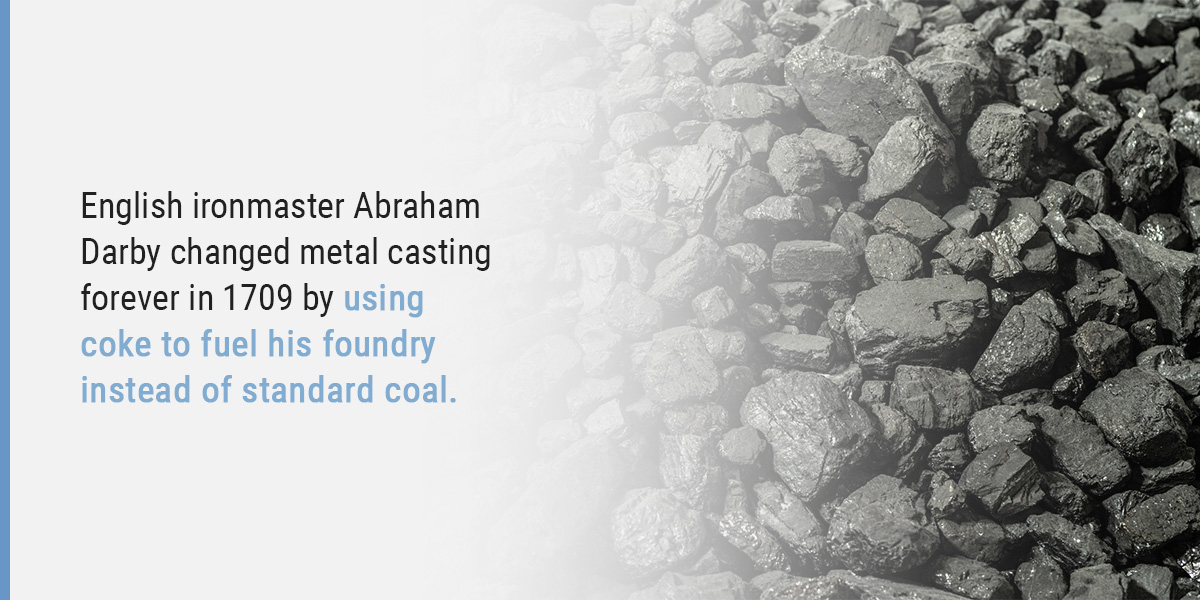 Metal casting continued to evolve into the age of empire, following European colonists to the New World. The first foundry on U.S. soil was the Saugus Iron Works in Saugus, Massachusetts, which opened in 1645 and operated for 30 years. It’s now a National Historic Site and museum.

English ironmaster Abraham Darby changed metal casting forever in 1709 by using coke to fuel his foundry instead of standard coal. Coke is a porous material rich in carbon that is made by heating coal in a confined, airtight space. Switching to coke made Darby’s foundry more efficient and cost-effective. It also enabled the construction of much larger furnaces than were previously possible.

A little over a decade later, French scientist Réne Antoine Ferchault de Réaumur developed the Cupola Furnace in 1720. The dome-shaped furnace has two openings — one at the top to insert the charge and one at the base to empty the furnace. It’s still in use today, though it has been largely replaced by electric processes.

Réaumur also allowed ironmasters to move away from brittle pig iron by inventing the first malleable iron, which he named European Whiteheart.

This new, strengthened iron had more applications than pig iron. Some time between 1756 and 1767, English ironmaster Richard Reynolds replaced wooden rails in Shropshire with rails made from refined cast iron. This is thought to be the first time iron rails were used for transportation.

Metal Casting in the Industrial Revolution

The early 19th century saw the development of centrifugal casting, which was patented by A.G. Eckhart in 1809. Centrifugal casting is a process that involves pouring molten metal into a rotating mold. The spinning motion ensures a uniform coating of the metal, which is key for casting high-quality pieces.

The Bessemer Converter was one of the most impactful innovations in the art of metal casting. In 1856, Sir Henry Bessemer discovered that by blowing oxygen into molten metal, steel casters could remove excess carbon and impurities and make the metal easier to pour. Similar methods are still in use today, but they’re far more precise.

How much has metal casting changed over the last century? A lot, especially when you consider how much electricity transformed most mechanical processes.

The electric induction furnace, which uses a high-power alternating current to generate heat in the metal, is a common tool in today’s foundries. The eddy currents that pass through the metal make it more homogeneous and reduce gain boundary segregations, resulting in a higher-quality finish. This technology enabled the development of permanent molds, which reduced the waste produced by single-use molds and improved efficiency.

The Present and Future of Metal Casting

For example, automation is becoming increasingly common in today’s foundries as it is both more efficient than manual processes and more accurate. It also allows foundries to maintain high productivity even when labor is scarce.

Simulation software is another growing technological advancement. Invented in the 1980s, these computer programs allowed casters to simulate mold filling and metal solidification processes, reducing the need for iterative trial runs. This technology has made modern metal casting far more efficient and accurate.

With such a colorful history behind this metalworking technique, the future looks even brighter. At Warner Brothers Foundry, we’re excited to be a part of that future.

We’ve been producing high-quality, non-ferrous castings since 1955, so you can rely on us for your metal casting needs. Contact us today to learn more about our materials and processes. 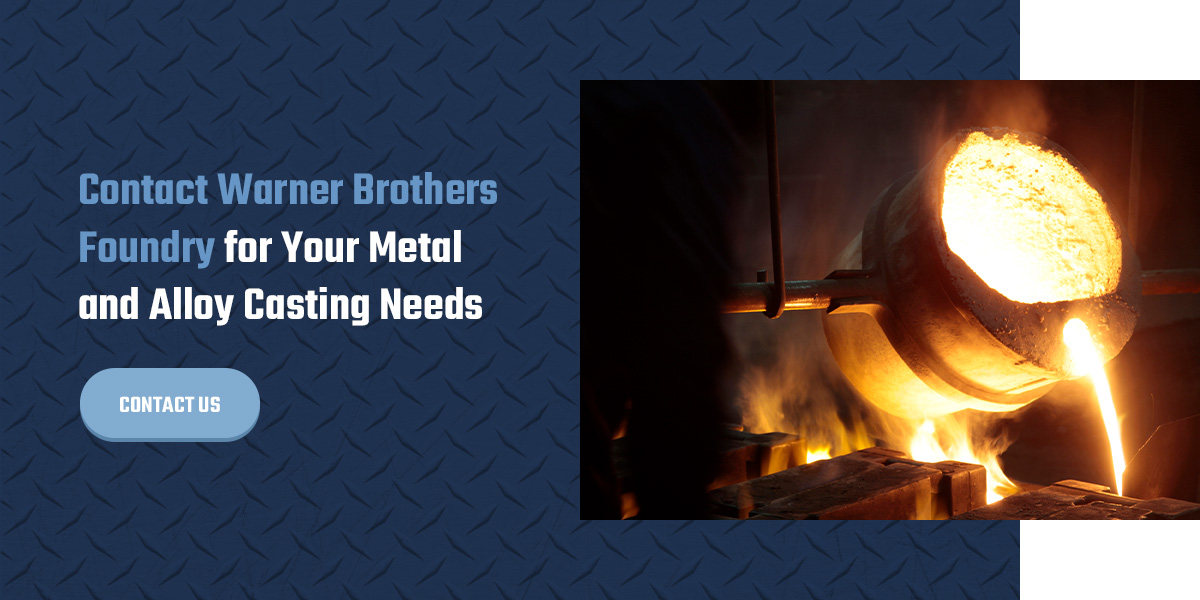 Warner Brothers Foundry guarantees that your aluminum part is manufactured 100% in the United States, along with all of our tooling. These are American made aluminum castings, the best in the world.